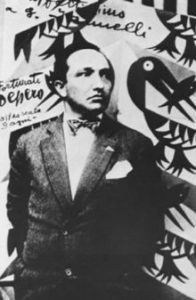 Although born in Fondo or in the neighboring village of Malosco, according to other sources (in the Italian Trentino region),[1] Depero grew up in Rovereto and it was here he first began exhibiting his works, while serving as an apprentice to a marble worker. It was on a 1913 trip to Florence that he discovered a copy of the paper Lacerba and an article by one of the founders of the futurism movement, Filippo Tommaso Marinetti. Depero was inspired, and in 1914 moved to Rome and met fellow futurist Giacomo Balla. It was with Balla in 1915 that he wrote the manifesto Ricostruzione futurista dell’universo (“Futurist Reconstruction of the Universe”) which expanded upon the ideas introduced by the other futurists. In the same year he was designing stage sets and costumes for a ballet.

In 1919 Depero founded the “Casa d’Arte Futurista” (House of Futurist Art) in Rovereto, which specialised in producing toys, tapestries and furniture in the futurist style. In 1925 he represented the futurists at the Exposition Internationale des Arts Décoratifs et Industriels Modernes (International Exposition of Modern Industrial and Decorative Arts). In 1927 he created for the publisher Dinamo-Azari of Milan one of his most famous objects–the so-called “bolted book” entitled Depero futurista to celebrate the fourteenth anniversary of Futurism.[2]