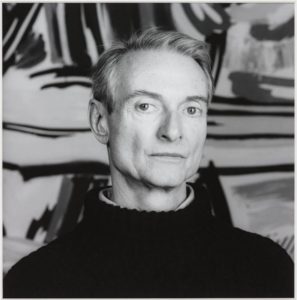 Roy Fox Lichtenstein (pronounced /ˈlɪktənˌstaɪn/; October 27, 1923 – September 29, 1997) was an American pop artist. During the 1960s, along with Andy Warhol, Jasper Johns, and James Rosenquist among others, he became a leading figure in the new art movement. His work defined the premise of pop art through parody.[2] Inspired by the comic strip, Lichtenstein produced precise compositions that documented while they parodied, often in a tongue-in-cheek manner. His work was influenced by popular advertising and the comic book style. He described pop art as “not ‘American’ painting but actually industrial painting”.[3] His paintings were exhibited at the Leo Castelli Gallery in New York City.

Whaam! and Drowning Girl are generally regarded as Lichtenstein’s most famous works,[4][5][6] with Oh, Jeff…I Love You, Too…But… arguably third.[7] Drowning Girl, Whaam! and Look Mickey are regarded as his most influential works.[8] His most expensive piece is Masterpiece, which was sold for $165 million in January 2017.[9]