The following was supplied to me directly from the dealer who purchased these works from Mr Romero in 1986 and 1987.  This information was acquired over a period of two years and many hours of conversation.  Having made many visits to Paris myself during this time, I was familiar with the Drouot Hotel auction rooms, Les Puces flea markets in Paris, and the Montparnasse area.  Personally, I found the French auction system a little confusing.

Gil Romero lived in Montparnasse, Paris.  By 1986, Gil was already in his late eighties and was in the process of disposal.  His vast collection of works on paper had been accumulated since just after WW1.

The year after Paul Durand-Ruel died, in 1922, Gil was hired by the gallery and worked there until 1930. 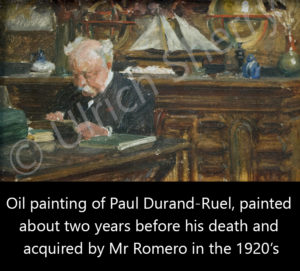 He then moved to other galleries around Paris, while maintaining his interest in collecting and dealing.  Gil knew many of the artists personally and acquired works from them at various times, depending on their circumstances.  (France was not immune to the post WW1 depression.)  He also started accumulating stock from other art dealers who had decided to leave France due to the uncertain political situation in Europe.
Gil stayed in Paris for the duration of WW2.  He said that, more or less, life continued as normal and also provided opportunities to acquire stock. Peggy Guggenheim was collecting larger works in oil directly from the artists and made several trips to Paris before hostilities reached the capital.  Gil’s collecting was more modest and in the main, consisted of works on paper.  Many of the watercolours came directly from Picasso’s sketch pads, used to quickly document scenes as they transpired at the bullfights. Picasso was interested in bull fighting from a very young age.  Romero had acquired many of these pads from the Drouot and removed the pages for disposal. Remember that for most artists in Post WW1 Paris, it was very hard to make a living, particularly for the new movement, which was Avant Garde, and not understood or accepted.  Daniel-Henry Kahnweiler was the exception, and became the saviour of many a starving ‘Cubist’.  Up until that seminal moment, Picasso was virtually destitute and scraped pennies together by selling watercolours and drawings at the Drouot or flea markets.  A meal or a glass of wine was often a deal clincher!

Gil continued collecting pictures through the 30’s, 40’s, 50’s and 60’s.  By the 1980’s, he had decided that it was time to retire to the South of France with his partner, Pierre Antiol. They had separate apartments in Montparnasse but had a house on the Cote d’Azur.
Gil Romero was quite hostile towards the ‘New Era’ of the larger auction houses.  The Drouot Hotel was no longer the predominant venue for the well healed to buy and sell paintings.  He just wanted to retire as his world was becoming consigned to history.